Based on the inheritance model, when a user or role is granted privileges to an object with child objects, those privileges also apply to the child objects, regardless of an object’s ownership. This is also known as scope, meaning the limits to which a privilege applies.

By default, all users are granted the PUBLIC role. However, privileges must be manually applied to each object.

Each object, such as a project, cloud, or dataset, exists within a hierarchy of “containers.” The uppermost container exists as the system administrator. All other objects are contained within sources or spaces and then organized into folders. The hierarchy of these objects is illustrated and described further on the Architecture help page.

Users may only see and use child objects if they’ve been given access to its parent objects. For example, a user cannot use SELECT or ALTER privileges on a dataset until they’ve been granted the USAGE privilege for the project housing those datasets.

If a user lacks the necessary privileges to edit or use an object, they will see a permissions error message indicating such.

The VIEW SCHEMA privilege was previously included in the following table. However, VIEW SCHEMA has not been implemented and that entry has been removed.

The objects to which user/role’s privileges apply depend on the inheritance model and ownership. Granting access to a parent object, such as your organization’s Dremio project, also gives that user/role the same privilege access to any objects in the project that exist currently or are created in the future, whether it is a dataset or source. Without privileges based at the project level, even basic users cannot view, query, or alter the datasets it houses. 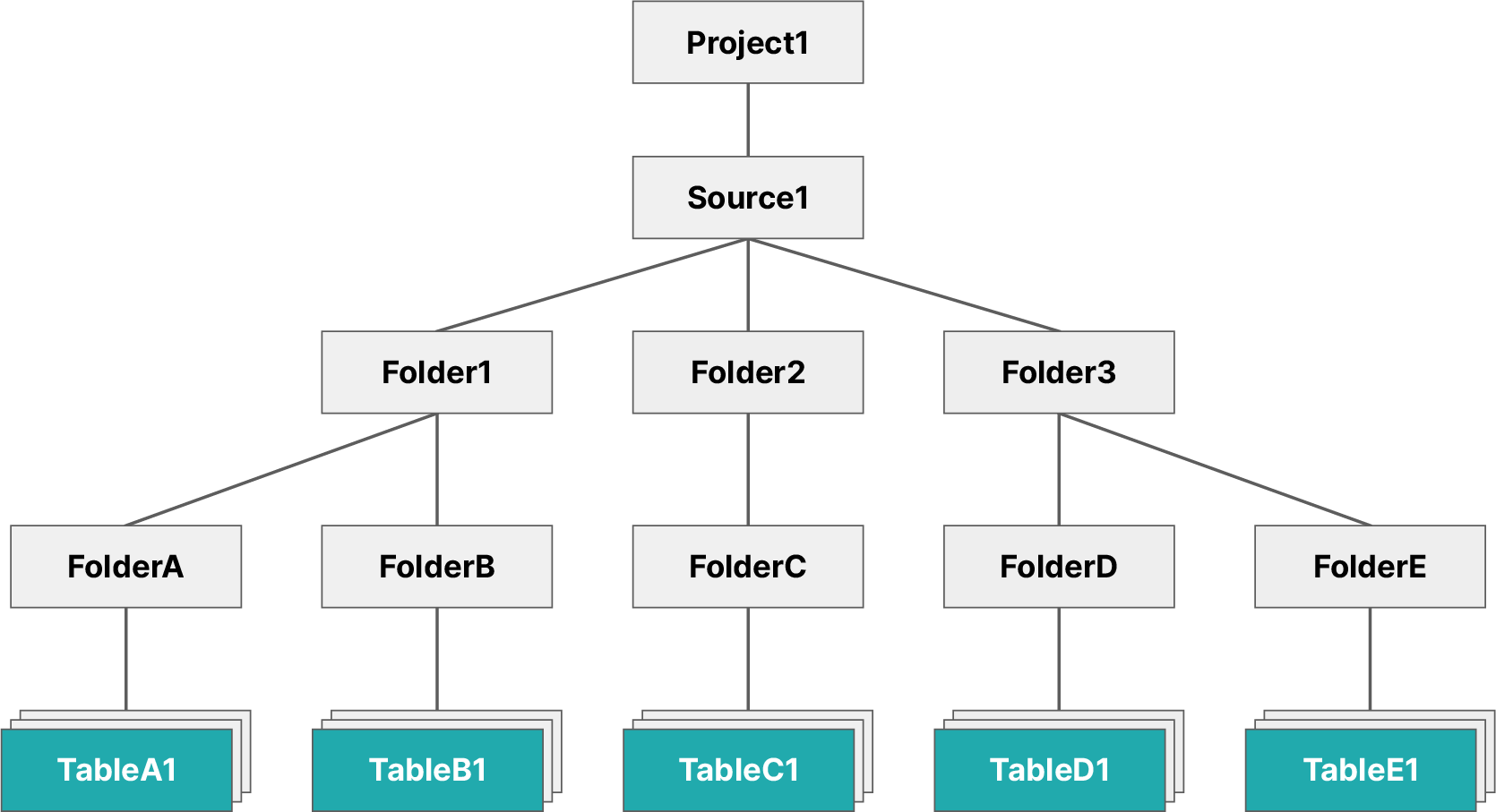 For example, giving a user privileges to ALL DATASETS will only grant the user access to all existing datasets in that project, not the folders that contain the datasets–which means they cannot access the dataset without first having the same privilege applied to the parent folder, and then the source, and then the project.

If a user has sufficient privileges for a single table, they may create a view based on that dataset, but with the user now having ALTER and MANAGE GRANTS privileges for any view. However, the user still retains the same privileges they held before with the original table, meaning the extended access granted to the view will not extend to the table it is based upon. For more information, see View Delegation below.

Scope is a concept used to describe what objects a user or group has access to. Privileges are assigned at the object level, which ultimately determines the actions a user or role may perform for any given object. 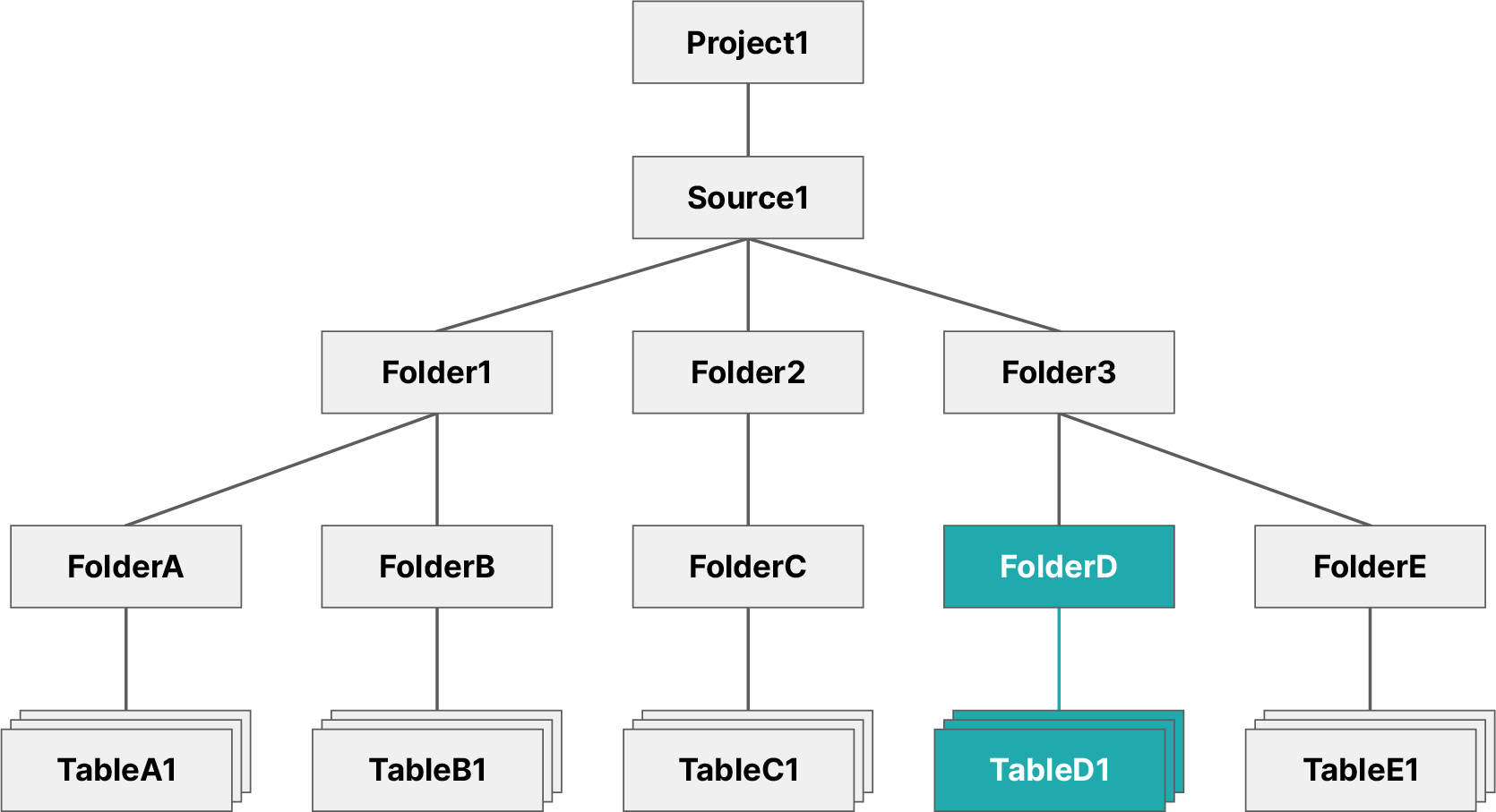 For example, user1 is granted the SELECT privilege for FolderD. This object contains multiple datasets, which the user may now query (but not edit, as ALTER was not granted).

Because of the established scope, user1 may not access FolderC, because they were only granted access to FolderD and its child objects.

Based on the selected scope, you may restrict a user’s access to future and existing datasets. For example, if you set privileges for a single table as the scope of a user’s privilege, then that user may only perform the associated action to that dataset. However, if the scope of a privilege is instead set at the folder level, then the user may perform the granted privilege to all tables and views contained in that folder.

Object ownership is a security feature used by database administrators to ensure access to an object is controlled as well as oversee who has that control. With Dremio, each object MUST have an owner, which is automatically granted to the user that initially created the object. For example, if a system administrator creates an S3 data source, Dremio automatically assigns them ownership.

The implication of ownership is that only an object’s owner retains all privileges for that object. As a result, the owner is able to grant or revoke user/role access to that object and any child objects associated, modify the object’s settings, and also drop or delete the object as desired.

The following behaviors or limitations apply to ownership:

Tables with restricted access may be used with greater access through the creation of a view. When a user with SELECT access to a table creates a view, then that user automatically becomes owner of the new object. They now have the ability to query and alter settings or data as desired. However, changes made to the view will not affect the original table.

Upon creating the view, the same rules of ownership as described above apply. The owner or delegation identity does not change when a view is edited or queried, but must be manually changed via GRANT SQL commands. To identify the owner of a view, query the sys.views table.

The shared view still selects from the underlying dataset using the view owner’s permissions at the time of the view’s last modification, even if the end user querying the view lacks privileges to modify the underlying table. This applies to each table on the data graph and chain of datasets.

When assigning privileges to users via SQL commands, you may utilize these methods: granting to a single dataset, granting to ALL DATASETS, and granting to a scope. Examples may be found under each section below.

These examples assume users already have the correct privileges assigned at the project level to access child folders and datasets.

Each of these examples includes an SQL command.

1. Granting to a Single Dataset

When you have a user that needs access to only one table and no other objects, then you would simply assign them privileges for that dataset.

You should use this method if you want to restrict a user’s access from any other existing or future datasets.

If you’re granting the user access to a table, then remember that they’ll be able to create views based on that table, which that user can then grant access to other users.

You have a user that you only want to give access to an individual table. You would need to navigate to the Privileges screen from that dataset’s settings and grant the user the SELECT privilege, or perform the following command from the SQL Editor: 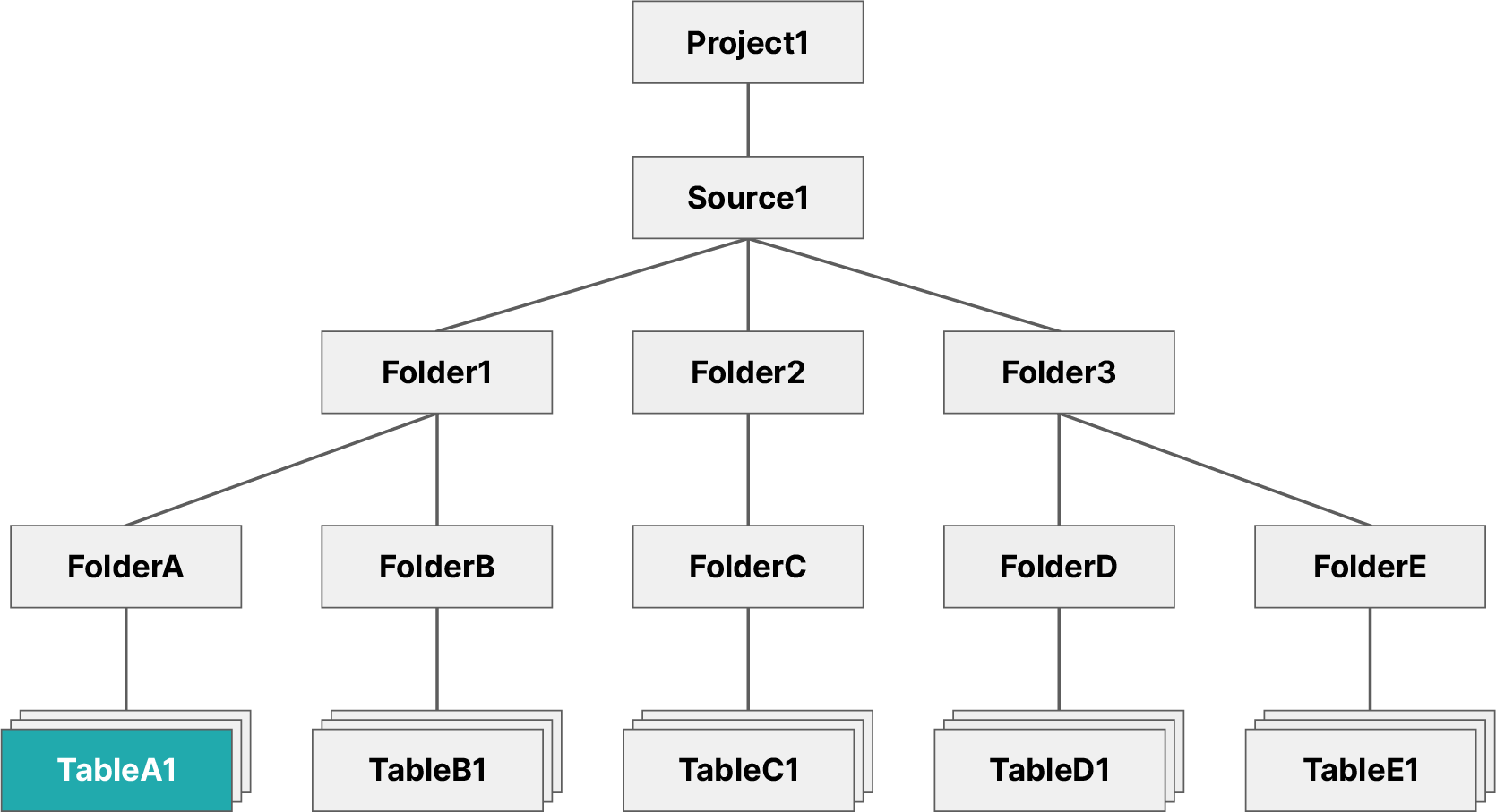 This restricts user1 so that they may only access the TableA1 table, not any other datasets contained in the same folder. However, user1 may still create views based on TableA1.

2. Granting to ALL DATASETS

You should use this method of privilege assignment if you want to restrict a user’s access from parent objects, but still wish for them to have access to all existing datasets.

You have a specific user that needs access to all datasets in a specific folder, but they do not require privileges for the folders containing these tables. You would then execute the following command from the SQL Editor:

This command restricts the scope of user1 to all datasets presently found in source1, such as TableC1 and TableD1. Should additional datasets be created in the future, user1 will not have access to them.

3. Granting to a Scope

When you want to grant a user access to a parent object, such as a folder, this will also grant the user access to any datasets contained (see the example scenario outlined below).

You should use this method of privilege management if you wanted to grant a user access to all existing and future datasets contained under a parent object.

This method grants a user access to all existing and future datasets contained under a specified object. To accomplish this, you need to navigate to the Privileges screen from that folder’s settings and grant the user the SELECT privilege, or execute the following command from the SQL Editor: 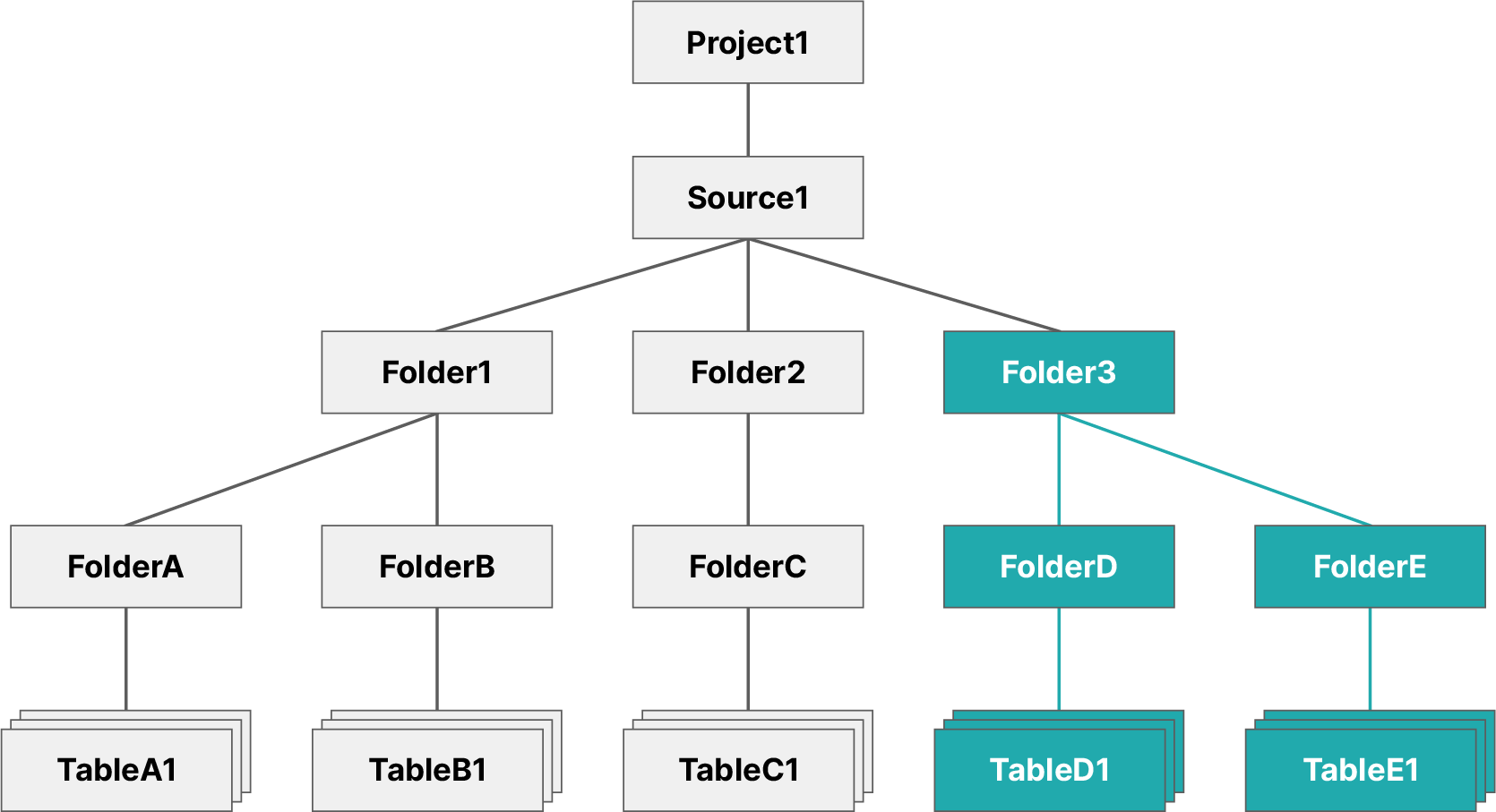 This grants user1 the SELECT privilege on Folder3, which means they now have access to all existing and future datasets contained in that folder and its subfolders.

By default, all users have all privileges granted to them for any objects without applicable permissions. Once a specific user has been granted access to an object, access is then restricted to only users granted access. All other users no longer have access.

The manual granting of privileges is accomplished using the SQL Editor, REST APIs, or the Privileges screen. The SQL Editor is accessible from any dataset and any GRANT SQL commands entered here will apply to the scope supplied with the command itself.

To assign privileges to a user for an object using the Dremio interface:

By default, all users have all privileges granted to them for any objects without applicable permissions. Once a specific user has been granted access to an object, access is then restricted to only users granted access. All other users no longer have access.

The manual revoking of privileges is accomplished using the SQL Editor, REST APIs, or the Privileges screen. The SQL Editor is accessible from any dataset and any REVOKE SQL commands entered here will apply to the scope supplied with the command itself.

To revoke privileges from a user for an object using the Dremio interface: