Getting Started with Dremio Sonar and Arctic preview

Dremio Arctic is a data lakehouse management service that enables you to manage your data as code with Git-like operations and automatically optimizes your data for performance. Arctic provides a catalog for Apache Iceberg tables in your data lakehouse, and leveraging the open source Project Nessie, allows you to use Git-like operations for isolation, version control, and rollback of your dataset. These operations make it easy and efficient to experiment with, update, and audit your data with no data copies. You can use an Arctic catalog with different data lakehouse engines, including Dremio Sonar for lightning fast queries, Apache Spark for data processing, and Apache Flink for streaming data. For more information on Arctic, see Dremio Arctic.

The following tutorial walks you through creating and using an Arctic catalog. You’ll also use the Dremio Sonar query engine to create, query, and update a table in the Arctic catalog using SQL. You’ll use Arctic’s Git-like operations, branching and merging, to isolate and verify changes in your dataset before adding them to the main branch. First, you’ll learn how to set up a Sonar project, create an Arctic Catalog from the Sonar UI, and then use Sonar to create a table in the catalog. Next, you’ll use Arctic’s Git-like operations to create a development branch of your table so you can update the data in that table in isolation of the main branch. After you validate your updates, you can then merge your work to update the data in the catalog’s main branch.

After completing this tutorial, you’ll know how to:

The examples below use the NYC-taxi-trips dataset from Dremio’s Samples bucket in Amazon S3. This sample data is automatically available as a source in the first Sonar project you create in Dremio. After completing this tutorial, you can continue to use this sample dataset.

If you need to create a Sonar project (Step 1), you need to have access to an Amazon Web Services (AWS) account and the following:

First, you need to add a Dremio Sonar project. In this Getting Started Guide, you’ll use Sonar to create, query, and update tables in an Arctic catalog.

To add a Sonar project:

The CloudFormation template sets up the necessary configurations and resources needed by Dremio Cloud. For more information, see Prerequisites in AWS and Permissions Required by Dremio. It can take up to a few minutes for the stack to be created in your AWS account. You can click Refresh (

) to update the stack creation status. After the stack is created, return to Dremio. You’ll know the project was successfully created when you see the SQL Runner page in the Sonar project. You can immediately run a query in the SQL Runner, which displays a SELECT * statement on the NYC-taxi-trips table from Dremio’s Samples bucket in Amazon S3.

To add an Arctic catalog to your Sonar project:

You can also click the plus (+) icon next to Sources.

For this tutorial, you do not need to configure the other tabs (Storage, Advanced Options, and Privileges), which are set with defaults that you can edit as needed. For more information, see Connecting to Dremio Arctic. 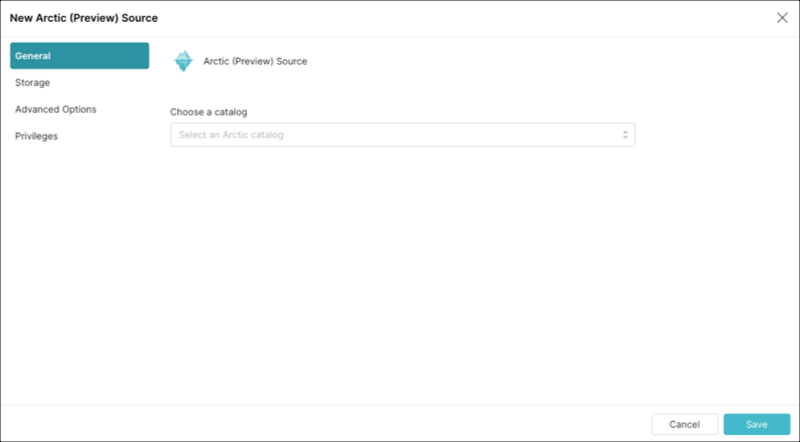 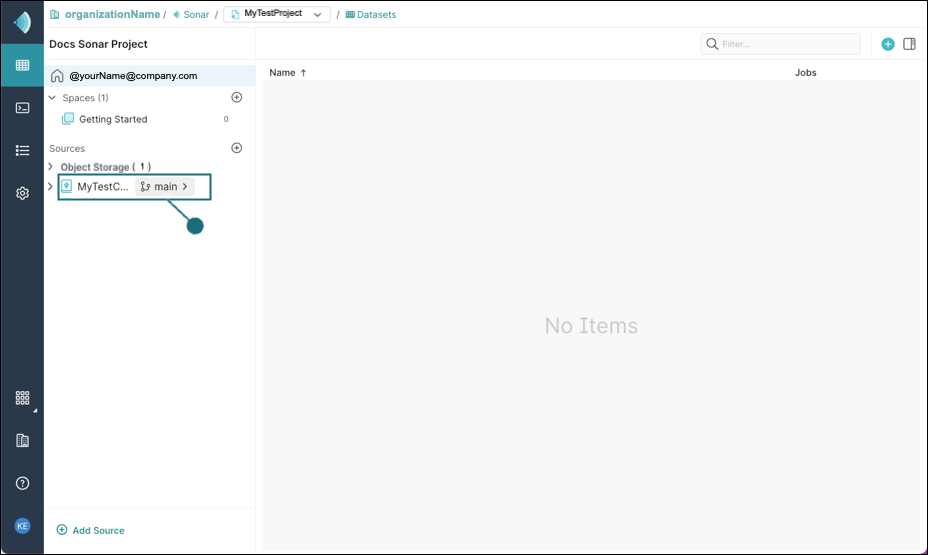 Step 3. Create a Table in the Catalog

In this step, you’ll use Sonar to create a new table in the Arctic catalog using data from the NYC Taxi Trips data in Dremio’s Samples bucket in Amazon S3. The file format of this dataset is Apache Parquet (purple folder icon).

To use Sonar to create a table in the Arctic catalog:

After the query completes, you’ll see the following result, which confirms the creation of the table, where it is stored (Path), and other details:

Step 4. Create a New Branch of the Table and Insert New Data Into It

In this step, you’ll create a branch in your catalog to isolate changes to your table from the main branch. Similar to Git’s version control semantics for code, a branch in Arctic represents an independent line of development isolated from the main branch. Arctic does this with no data copy, and enables you to update, insert, and delete data in tables on new branches without impacting the original table in the main branch. When you are ready to update the main branch from changes in a secondary branch, you can merge them (Step 5). For more information on branches and Arctic’s Git-like operations, see Git-like Data Management.

You can use Sonar to create a branch in your Arctic catalog using SQL:

The query result will show the details about the new branch you created:

After you see a confirmation message at the top of the page that the row has been inserted into the table in the etl branch, you can verify that your insert statement succeeded by running the following SQL statement:

The result has 11 rows, verifying that your row was correctly inserted (because you started with 10).

To demonstrate isolation across branches in your catalog, if you run the same query on the main branch, the record count is still 10. This shows that your insert was not added to the main branch. Any queries using the table in the main branch would therefore not be affected by inserts into the etl branch. In a production scenario, this is helpful because you can insert and validate new data in a new branch without affecting workloads on the main branch.

Step 5. Merge Your Changes Into the Main Branch of the Table

To see that the data in the main branch is updated, you can count the rows using this query:

Counting the Number of Rows in a Table

You’ll now see 11 rows in the table, reflecting the inserted row made in and merged from the etl branch.

You can quickly and efficiently recover from a mistake when working in an Arctic catalog. Every change you make is contained in a commit. So you can simply revert to a previous commit. And since multiple table transactions can be done in a commit, you can roll back changes made to multiple tables easily using one command. The example below demonstrates the command operating on one commit that applies to only one table.

Take the following steps to get the commit ID and revert to a previous commit:

Reverting to a Previous Commit

You can query the table and verify that it has reverted to the previous commit:

Wrap-Up and Next Steps

Congratulations! You have successfully completed this tutorial and used Arctic’s Git-like operations to manage your data as code.